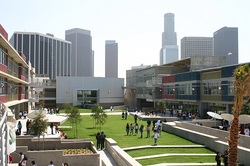 Los Angeles School of Global Studies (LASGS) opened in September 2006 as a member of the New
Tech Network, a nationwide alliance of 62 schools. The New Technology model is centered on
project-based learning, a culture that empowers students and teachers to learn collaboratively, and
integrated technology in the classroom. LASGS is one of a handful of schools in Los Angeles Unified School District (LAUSD) that uses a Project-Based Learning curriculum to develop 21st century skills. Its standards-based, technology-rich instructional program encourages students to learn through collaboration with peers, businesses, and the community. Students develop problem-solving skills, interpersonal skills, and the resiliency they need to succeed in a rapidly changing and competitive world. To achieve these goals, the staff works collaboratively to develop engaging cross-curricular projects. Because of its faithful replication of the model, LASGS has been designated a National Demonstration Site of the New Technology Network for the past two years.  LASGS is a small public high school occupying one hallway at the Miguel Contreras Learning Complex (MCLC). Global Studies shares the auditorium, sports facilities, library and cafeteria with the other schools in the Complex. The other schools on the campus are Academic Leadership Community, a small pilot school, and the Miguel Contreras Learning Complex High School which houses two small learning communities: Business and Tourism (B&T) and Social Justice (SJ). These schools, along with LASGS, are four of the seventeen small schools and small learning communities that comprise the Belmont Zone of Choice (BZC).  The BZC was the vision of an innovative Local District 4 superintendent who believed that giving students choices would increase engagement while reducing overcrowding at nearby Belmont High School. The students from three large urban feeder middle schools choose to attend any high school in the BZC, including schools that focus on arts, entertainment, and a variety of other themes. The BZC is collection of schools that serves the approximately 6,000 high school students from the neighborhoods of Pico-Union, Westlake, Rampart, Angelino Heights and Echo Park neighborhoods. The population of these neighborhoods, just west of Downtown LA, totals over 110,000, with a high density of 38,000 persons per squaremile. The area attracts a variety ofimmigrants. Hispanic ethnicsubgroups (e.g., Mexican and Central American) and Asian (mostlyKorean) predominate, whilethe Filipino, Caucasian, andAfrican- American subgrouppopulations total less than 10%.Businesses are primarily smallfranchises, family-owned restaurants and shops. However,there is a large shopping center witha major home improvement storeand super markets. In addition,there are a number of medicalhospitals, clinics and governmentalservices. The Los Angeles Area Chamber of Commerce, Los Angeles Center Studios and Los Angeles Unified School District arelocated just east of the school